When is a Risley Prism the best solution?

Previous posts have explained reflective, anamorphic and dispersive  prisms and their use in optical systems.  Today we will explain a prism configuration called Risley Prism.  A Risley prism is actually two wedge prisms close to each other that can be rotated independently.   This configuration was first used in optometry to measure the misalignment of eyes.  However, their current application has moved beyond optometry.

The Risley prism consists of two wedge prisms with equal refractive indices that can be used to steer beams around the optical axis.  The first prism refracts light at a specific angle; we can then rotate the prism and the refracted beam will describe a circular pattern with a constant radius.  By adding a second wedge prism, we can add a second rotational axis. A simple schematic is shown in figure 1.

The second prism should be slighter larger than the first one to accommodate the full beam at its larger angle.  The flat surfaces of each of the wedge prisms are parallel to each other and perpendicular to the axis of rotations.  The critical aspect in the design, however, is the mechanical support.  It not only needs to keep the spacing and correct positioning for each prism, but it also needs to allow for rotation of each wedge prism in any direction, independently of each other.

Risley Prisms provide a compact and robust configuration to scan a beam over a wide range.  This is attractive in systems where vibrations may be an issue, like LIDAR or free-space communications.  They are also used where space restrictions are important like with confocal microscopes.  Risley Prisms offer some advantages over traditional gimbal mount mirrors in scanning applications because they offer:

One unique aspect of Risley Prisms is the scanning pattern they can create.  The pattern will change depending on the direction of rotation of each wedge prism and their relative angular velocity with respect to each other.  In general, a Risley Prism will create a series of patterns called Rose Curves.  Two of these patterns are shown in figure 1.  A couple of things are important to note:  one, line and circular pattern are a subset of the Rose curves; and two, there is a gap in the center of the optical axis for almost every pattern.

Disadvantages to consider when determining if a Risley prism is the best solution for your application include:

← How does a light pipe overmold work? Optical Design Considerations for Underwater Optics →

END_OF_DOCUMENT_TOKEN_TO_BE_REPLACED 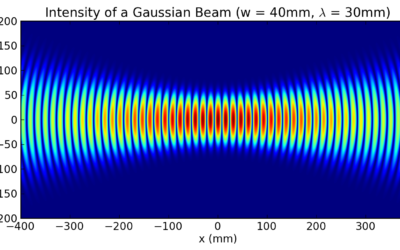