When making first order optical design calculations, most engineers use parameters based on paraxial (or ideal)  systems.  That is, lenses in which the chief rays are very close to the optical axis.  However, that’s not always the case, and as we move away from paraxial optics conditions, the presence of aberrations has a greater impact on design performance.

In the late nineteenth century, Ernst Abbe defined the relationship between the object height and the image height which allowed for new complex systems with better image quality to be developed.  As a matter of fact, Abbe worked with Carl Zeiss in developing microscopes. This relationship we now call the Abbe Sine condition to recognize his contribution. 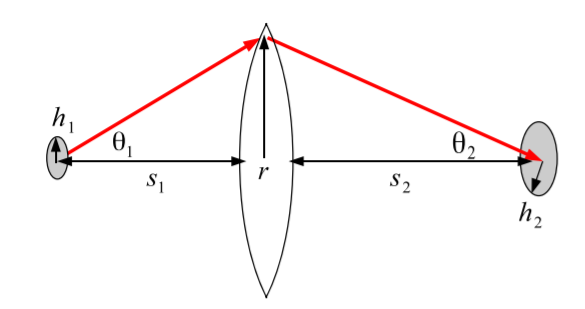 The Abbe Sine Condition can be expressed in different mathematical formulas, but this one is very intuitive:

Where the Abbe Sine condition is expressed as the magnification of an optical system, the refractive index of the object, an image space and the marginal rays. The basic optical significance of the Abbe sine condition  is a requirement that for imaging of off-axis points the magnification ratio should be the same for all rays irrespective of the angle  at which they were traveling in medium 1. It follows that the ratio on the right side of equation 1 should also be the same for all rays. The Abbe Sine Condition thus creates a  requirement that the magnification of an image should be the same regardless of where the rays hit the lens surface.

The Abbe Sine Condition has a very practical application: aberrations generally have their worst effects for the ray striking the edge of the lens at the largest angle (i.e. its marginal ray). The ASC thus gives the optical engineer a simple and quantitative target: optimize a lens combination so that for the marginal ray, the ratio n1sinQ1=n2sinQ2 is as close to the magnification h2/h1 as possible.  Additionally, the ASC gives a method for quantifying the order of the aberration in a system. For any ray (not just the marginal ray) we can write the angle 2 on the right as a function of 1 or vice-versa, and then express n1sinQ1=n2sinQ2 as a power series in one of those angles. The zero order term should be equal to the magnification, and the goal for the coefficients of higher order terms is to either set them to zero or else minimize them. The cancellation of a factor in the ratio of odd functions (sines) means that the third order coma has been eliminated.

← How F-Theta Lenses work ( & when to use one) How does a light pipe overmold work? →