One industry with a strong interest in this trend is suppliers who add custom optics on top of a cell phone for specific applications. These applications include consumer photography (Photojojo), medical devices like otoscopes (CellScope) and eye health inspection devices (SmartVision) These add-on providers need to keep a sharp eye on changes in camera optics and mechanics  as they could have a  big impact on their own product road maps.

One of the key technical obstacles that must be overcome to improve image quality is the mechanical space limitations. The thickness of a mobile phone very seldom exceeds 10 mm. The sizes of mobile optics used inside of cameras are correspondingly small. The design of optics that could fit is not always possible. In fact, the laws of physics are so inconvenient that Apple, which is known for its love of sleek industrial design, downplayed the fact that even on the iphone a ‘bump out’ was needed to provide the proper space for camera optics.

A mirror is placed in front of the Lens at an 45 degrees angle relative to the optical axis. Such placement enables changing the direction of the optical axis to 90 degrees. As a result, lenses can be placed along the mobile device case. This means that the length of the lens is not limited by the case thickness. According to the patent, the camera thickness can reach 32 mm with such a mirror. A longer optical system makes it possible to improve the optical quality and and devi functionality.

An obvious benefit of this approach is that it makes it possible to use more optical elements with simpler shapes for better optical performance.

Greater lens length assumes that the angles of ray propagation relative to the optical axis become smaller. This reduces the amount glare and its intensity. It also reduces the probability of ghost images and light loss due to scattering on the lenses.

Another advantage is the ability to design structures for optical zoom. The patent describes a method using movable lenses. The lens focus can be changed over a fairly wide range.

Another potential advantage of the mirror is image stabilization. A method to do that is detailed in anoher patent. Magnet and electrical coils are used to control the mirror tilt and feedback is carried out by Hall sensors. It is assumed that the proposed structure will significantly reduce the effect of camera shake on the quality of the resulting picture.

The patent also described a beam-splitting prism placed behind the camera optical system. It consists of four triangular prisms. The basis of each prism is an isosceles right triangle. The main purpose of this prism is to separate the optical channel into three parts.

Each of the three channels is designed to work with a specific range of wavelength band (color) – red, blue, and green. Each channel has a separate sensor. Color images received by such methods are the result of processing of three separate images.

Such an approach to image acquisition and its processing makes it possible to relinquish Bayer filters. This increases the amount of light on each pixel by almost three times, thus significantly increasing camera sensitivity. Moreover, many other problems associated with the Bayer filter are solved with the light separation method-another reason why the growth of camera resolution can be expected.

The developers noted that the prism could be used not only for color separation: the wavelength band can be shifted (widened) in IR (UV) light region. A beam-splitting prism can be modified to separate IR (UV) from visible light. Another mentioned application is polarization imaging without the loss of light.

it should be noted that the presented optical scheme has some potential drawbacks. Here are a few:

Thickness of the mobile device determines the maximum lens diameter

When the camera lens is placed along the mobile device case, the maximal diameter of its optical elements is limited by the case thickness. It is likely that the field of view of the cameras installed in the thin mobile device will have an even poorer field of view in current layouts. Uniformity of illumination in the image plane could also be a problem because of the small lens diameter.

Thickness of the mobile device determines the maximum sensor size

Separation of the light flux into three parts presupposes using three separate sensors. At least one of them will be placed perpendicularly to the mobile device. This means that the size of this sensor should not exceed the thickness of the mobile device, which could be problematic especially for very thin gadgets.

Mobility of the entrance pupil

The way out of this difficulty may be in fixing the mobile camera focus. This way, the entrance pupil remains motionless and any additional device can work without a problem. Alternatively, optical engineers could design an adaptive construct with a feedback system that could monitor the mobile camera entrance pupil adjusting in turn the position of the optical attachment exit pupil. Of course, this renders the design of more complex and expensive.

The design and the ideas presented in the Apple patent are an attempt to deal with some of the fundamental limitations of small optics . Despite the fact that the proposed design shows the way out from a number of limitations inherent to conventional cameras, it has its drawbacks. It is possible that the bright minds working at Apple will be able to neutralize all the shortcomings and new digital cameras will satisfy the most demanding users 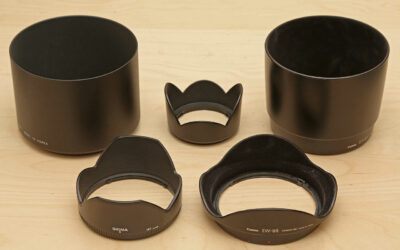