Among the many lens design configurations, one of the most common lens optical layouts is the Tessar Lens.  This layout was created by Paul Rudolph in 1902 for photographic lenses.  In the golden age of film photography, the Tessar configuration was widely used in common lenses such as the f 50mm/f2.8

As with any photographic lens, the lens designers’ goal is to maximize image quality, which means removing as many aberrations as possible, especially reducing chromatic, spherical, and astigmatic aberrations.  As mentioned in previous articles, one way to reduce chromatic aberration is by combining crown and flint glasses.

In a Tessar configuration, this is done by grouping four optical elements into three groups as shown in Figure 1. 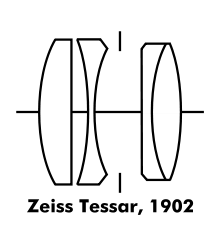 The first optical element is usually a positive crown lens while the second one is a negative fling lens and a double achromat at the end.    It is very similar to the Cooke’s triplet configuration: in the Cooke’s triplet, the rear lens is replaced by a single element lens. The last doublet helps further eliminate spherical aberrations.

When beginning the design of a Tessar lens, the best place to start is with the glass selection. For best results, the positive elements should be made of high-index crown glass. This helps to reduce the naturally negative Petzval sum and higher-order aberrations.  To reduce the three transverse aberrations (lateral color, coma, and distortion), a rule of thumb is to try to make the system as symmetrical about the stop as possible. Perfect symmetry is impossible because the object is at infinity and the stop is not exactly at the middle element. Nevertheless, the design still contains symmetry. This symmetry can help in deriving a starting configuration. In addition, a look at published Tessar layouts will suggest some useful initial constraints that can point the lens in the right direction.

Other starting points are:

There are more considerations in designing a lens, and many more when considering its optimization.  In this blog, we have talked about achromatic design and optimization, correcting chromatic aberrations, and the steps for a “typical” lens design.    So take a look at those and send us an email if you need assistance with your designing needs.