One of the most common optical structures is the achromatic doublet. It is used to reduce chromatic aberrations.  At its most basic, it is a two lens system configuration where one lens is a concave lens, usually made of a flint glass, and the other is a convex element, usually made with crown glass.

Why these shapes and materials?  We will try to explain the reason behind this structure. 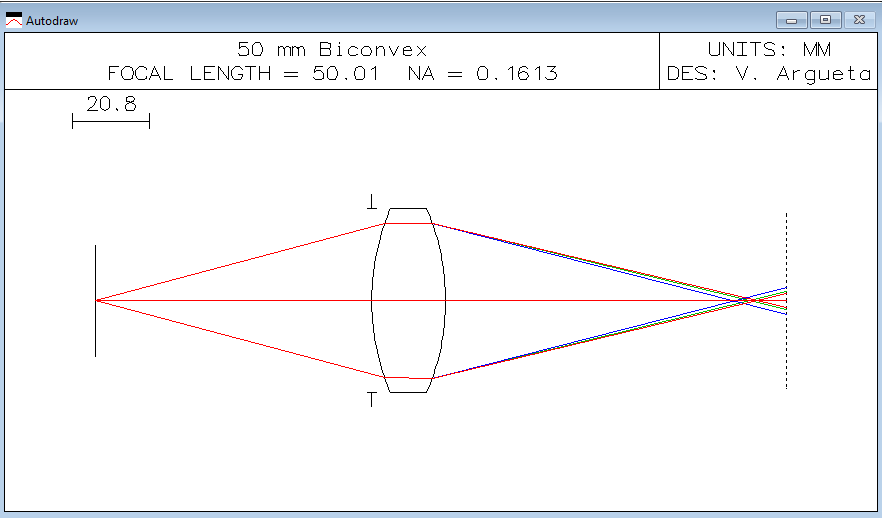 In order to reduce chromatic aberration, we need to find a way to match the lens focal length regardless of the wavelengths we are using. A way to do this is by using an achromatic doublet.  As mentioned before, the achromatic doublet has two lenses:  a negative lens (concave) and a positive one (convex).  The basic idea is that both lenses will compensate their respective dispersions and cancel each other.

The negative component is usually made of what is called “Flint glass”.  Flint glass has some lead and a particular high chromatic aberration (described by an Abbe number below 50), and high refractive index (usually above 1.55).  Some types of flint glass are: F, LF, SF, KF, BaF, BaLF.  Lead-free flint glass usually has a “N” before their name.  For example  N-SF8.

Crown glass on the other hand is used to fabricate the positive component.  Crown glass has a low dispersion (with an Abbe number above 50) and low refractive index (usually below 1.5), although some glass like BK7 has a refractive index that overlaps with some flint glass.  Crown glass names usually include a “K” at the end (form the german “kron”, crown).  Some types of crown glass are:  K, SK, BK, LaK, LaSK and many others.

A first approximation to design a doublet uses a two linear-equations system:

If we can correct the lens shown in Fig. 1 with an equivalent achromatic doublet, we will set feq to 50 mm and choose two materials for our lenses.  For the flint glass, we choose N-SF8 with an Abbe number of 31.31 and for crown glass, we choose N-BK7 with an Abbe number of 64.17. Substituting these values into Eq. 3 and Eq. 4, we obtain values of 25.61mm and -50.48 for f1 and f2, respectively.  Figure 2, shows a chromatic aberration using these numbers (note: the lens is not optimized). 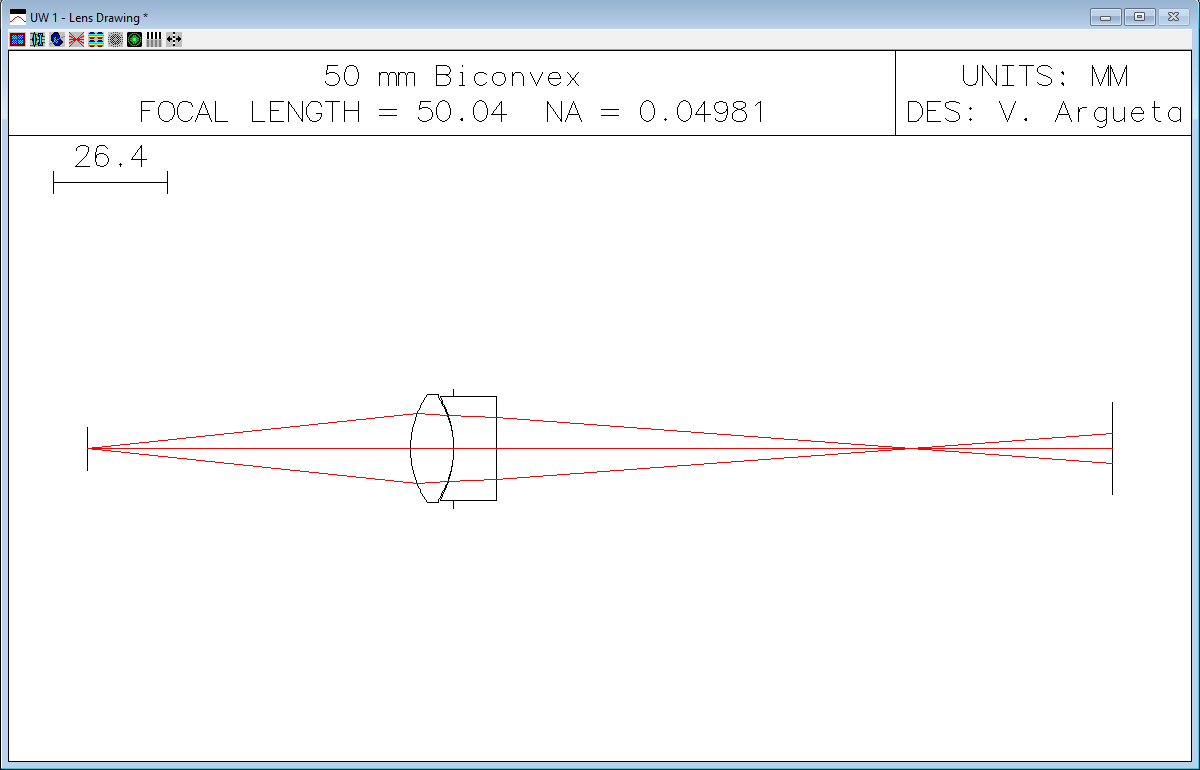 The combination of unique materials (flint glass and crown glass) and the lens shapes of the doublet, an optical engineer can use the science of light to deliver lens solutions without chromatic aberrations.

We will now review the steps necessary to optimize an achromatic doublet.

Before we start, we need to mention that there are different ways to optimize any design; there is no “formula” that an engineer can apply to yield the best results.  It is a process that requires revisions and feedback.  It is, in a sense, an art that benefits from the optical engineer’s technical knowledge.  What is presented here is just a method we have used in the past with acceptable results.

We start by assuming that we have the goals of our designs, that is, we have the focal length, wavelength range, aperture diameter, FOV already defined.  Based on this information, we have several variables that we can manipulate, those are:

Based on these variables, we will try to optimize for three aberrations: chromatic, coma, and spherical aberrations

The first aberration that we will try to correct for is chromatic aberration.  This is, after all, one of the main reasons we will be using an achromatic doublet.  As mentioned in the early article, an achromat is formed by using a flint glass and a crown glass.  Using the right combination of glasses will reduce chromatic aberration but the choice of glass can be daunting. How do we know what type of glass to use?

We first need to be familiar with the concept of the Abbe Number (or V-number), a measure of the dispersion of glass; the higher the Abbe number, the lower the dispersion.  Figure 1 shown the Abbe diagram where we can plot the V-number versus the refractive index for several types of glass. 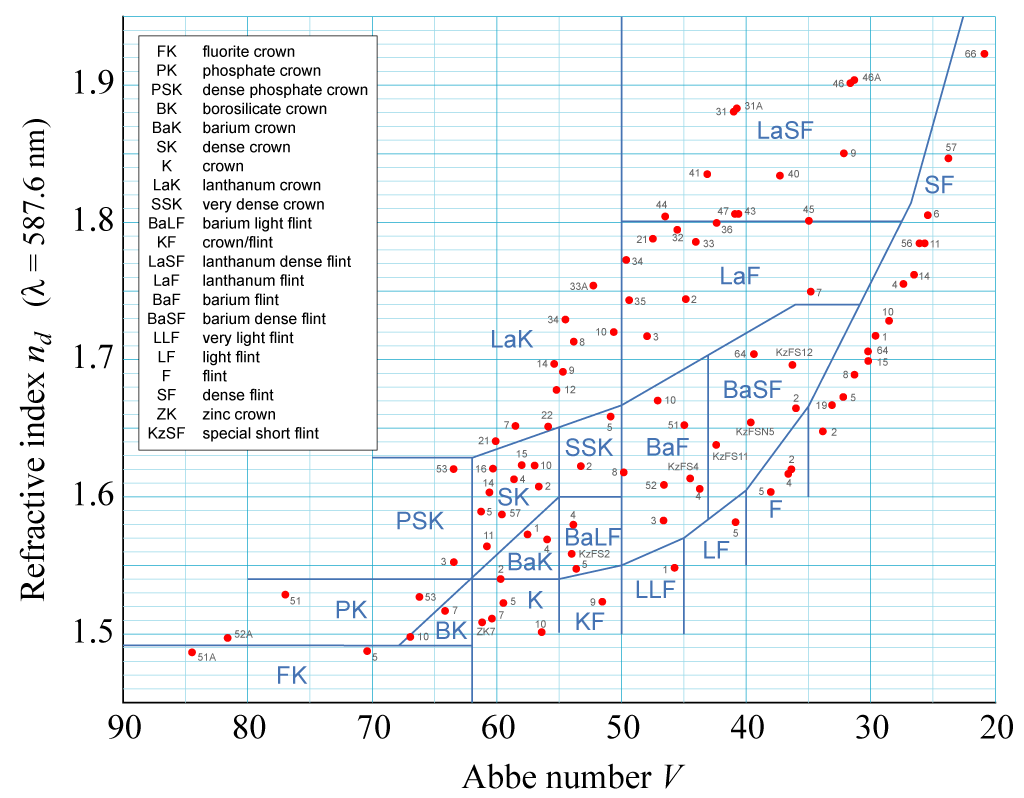 In theory, you can pick any combination of two glass types. although there are some guidelines that are helpful:

Once the glass types have been chosen, we can calculate the focal length of each optical element in our doublet with the following equations

With the right combination of glass, we should be able to significantly bring down chromatic aberration.

In the previous step, we calculated the focal length of each lens, but we still need to define the radii of curvature.  So let’s define those before attacking coma.  To simplify (and reduce the length of this article), we will assume symmetric lenses with equal radii of curvature in the front and back surfaces of each lens.  A first approximation for our lenses can be found using the following equations:

Now, to correct for coma, we will adjust the radii of curvature of the first and fourth surface, (i.e. the first surface of the first lens and the second surface of the second lens).  In order to keep the optical power unchanged, we would like to have (1/R1)+(1/R4)=const.  So, increasing one radius will decrease the other one.  We will repeat this process until an acceptable coma reduction is achieved.

When correcting for one aberration, we need to keep monitoring the whole system: more often than not, lens optimization is a matter of compromising.  Sometimes it is not possible to completely reduce all aberrations simultaneously.

The presented method is just one that may help you to do a simple optimization.  More complicated methods involve reducing chromatic aberration for a specific line and calculating coma coefficients for each optical element, and minimizing their combined effect.  This method gives a better starting point to reduce aberrations.

There are also different configurations of achromatic doublets you may want to consider, for example:  Littrow, .Fraunhofer and Clark doublets.

Here we will show the process of achromatic doublet optimization. We’ll start with our requirements.  We’re looking for a 50mm focal lens with a 20-degree FOV and 30 mm diameter.

We’ll start with a single BK7 biconvex lens, shown in Figure 2 along with its spot diagram. 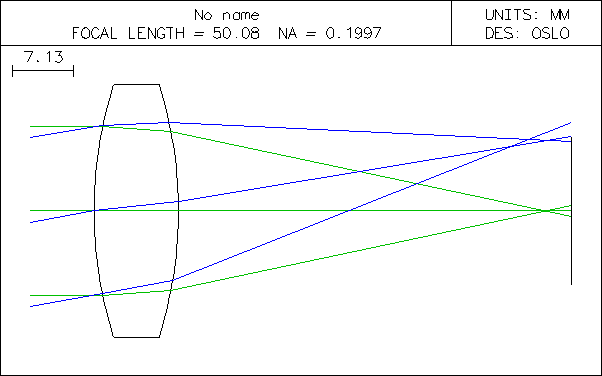 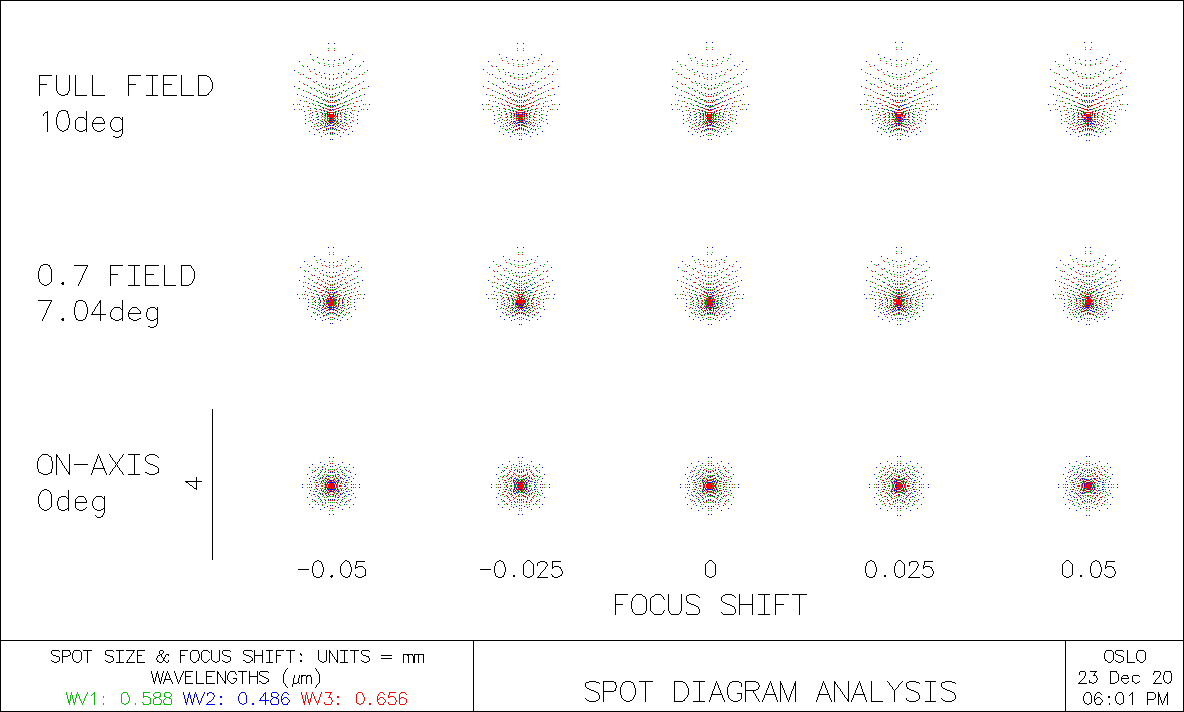 From the spot diagram, we can see that there is significant coma (specially at full field) and some spherical aberration.  Look at this entry to learn more about spot diagrams.

We calculate some of the Seidel aberrations and look at the Ray Analysis graphs (we should talk about them at another time).  We calculate a chromatic focal shift of 1.5 mm along the axis,  a maximum spherical aberration of 4mm at 20-degrees, and a Seidel coefficient for coma (third-degree) of 0.157. 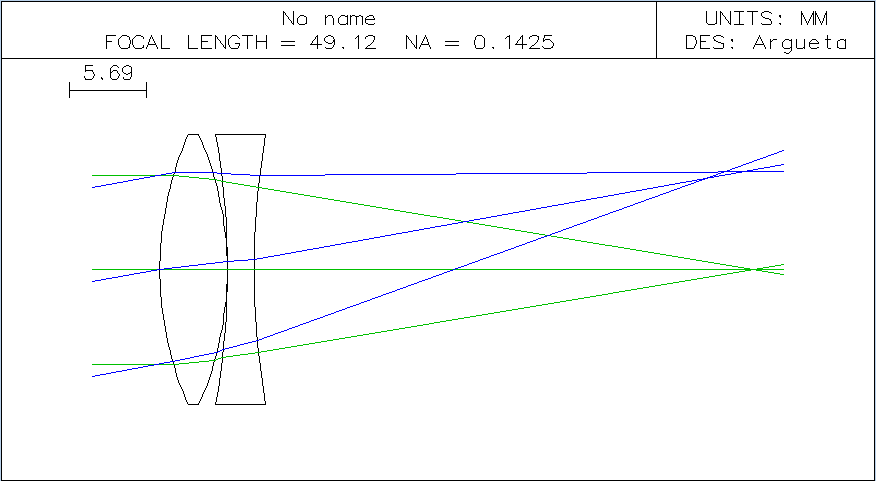 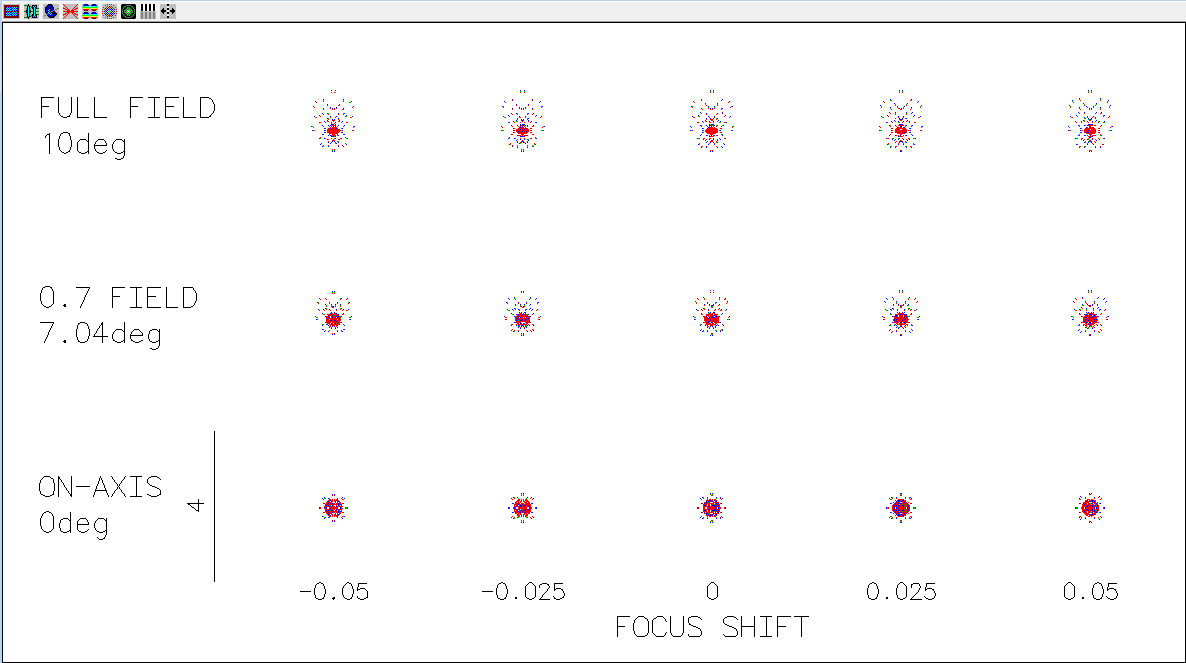 We still see significant coma and spherical aberration at this point: the chromatic focus shift however has decreased from 1.5 mm to less than 0.1 mm.  There are no significant changes on spherical or coma at this point. So we will try to correct for coma next.

At this point, we will be changing the radius of curvature of the first and fourth surfaces.  We’ll try to keep the focal length as close as possible to 50mm.  There are different ways you can try to do this optimization.  OSLO and Zemax have different algorithms that can be used for different kinds of optimizations.  For this example, however, we will just change the values in small amounts.

Figure 3 shows the changes on the first and fourth surfaces. We changed the first surface from 24.77mm to 23.8mm and the fourth surface from 59.33mm to 60.2mm.  After these changes, the chromatic aberration is still under 0.1mm as before, but the Siedel Coma coefficient has been reduced to 0.0305 (from our original 0.157).  Also the spherical aberration has been reduced to almost 2mm at 20-degrees, so we will try to improve it next.

At this point we will try to achieve two objectives: reducing spherical aberrations and keeping the focal point as close to 50 mm as possible.

Let’s change the spacing between the first and second lens, and also the radius or curvature of the first surface of the second lens. We keep this iteration going until we reach the following lens combination.

We can see that our focal length is closer to our required 50 mm. We also still have our coma coefficient around 0.02 (just a little bit lower than before) and the spherical aberration less than 3 mm at 20-degrees.

We will stop our discussion about optimization here.  As mentioned before, there are different ways to attack this problem, and there are more tools that we can use to analyze an optical system.  In future blogs, we will talk about ray intercept graphs and we can return to another example of optimization or simple analysis.

← Which is better a CCD or CMOS image sensor? Types of Optical Designs used for Rifle Scopes →