When I was a young undergrad engineering student, I always found optics to be a very confusing subject.  It was not only the equations, but what it looked like hundreds of different definitions involved in even the simplest of optical systems.  Some concepts, like radius of curvature, f-number, and focal point were easy to understand while others, like principal plane, entendue, and Seidel’s aberrations were more complicated.

We are going to start our definitions with the help of a thick lens.  Thick lenses are those in which the lens thickness is not ignored.  When working with thick lenses, we assume that the light is refracted in two different surfaces.  We prefer to work with thick lenses because it gives us better results ( even if it’s more complicated than thin-lenses).

At first look, Figure 1 looks quite intimidating (at least that’s how I remember feeling back in school), but with a little bit of patience, we will describe every element in the figure.

Nodal points have an interesting property in that when a light ray is incident at one of them, the refracted beam will appear to have come from the other nodal point.   We can say that the nodal points define a location with unit angular magnification.  They can also help us define the lens’ optical center-where the nodal ray intersects the optical axis. 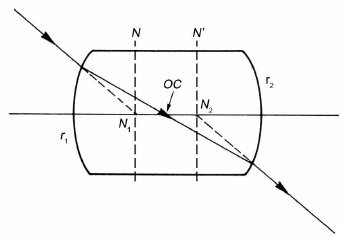 Fig. 2. The optical center is where the nodal ray crosses the optical axis. FIgure from  R.B Johnson

The vertices, V1 and V2 in Figure 1 are the physical points at which the lens crosses the optical axis.  These are measurable points that help us set the lens’ position.  So, in many cases, the cardinal points use the vertices as reference points.

Hopefully, these short explanations will help you next time in reading the description of an optical system, or if you are in the process of developing one, you can communicate better what parameters need to be corrected.  If you would like for me to go through other optical definitions please let me know in the comments. I would love to hear from you.