In an achromatic lens design, we optimize such that two wavelengths, usually red (590nm) and blue (495nm), focus on the same image plane. This is done to reduce chromatic aberration.  In this article, we’ll talk about a similar design type called an Apochromatic lens design.

What is an apochromatic lens?

The goal of the apochromatic lens is also to reduce the level of chromatic aberration.  However, unlike an achromatic lens, we use three different wavelengths:  red (620nm), green (530nm) and blue (465nm).  The intention is the same: bringing all three wavelengths in focus in the same image plane.  As you may suspect, the design tolerances are tighter when we are designing for three wavelengths.  A design of an apochromat lens is shown in Figure 1

An important aspect when designing an apochromatic lens is in the choice of materials.  We want materials where the dispersion at each wavelength compensates as light travels through the different materials.  So a combination of flint and crown materials is often necessary. In some designs, a refractive index matching liquid can be used between optical elements.

In order to achieve apochromatic correction, a system with three elements must satisfy the following equations

Where fx is the focal length of each optical element, f is the overall focal length of the system, Vx is the abbe-number of each element and Px is the partial dispersion. The P and V values can be obtained from a P-V diagram as the one shown in Figure 2. 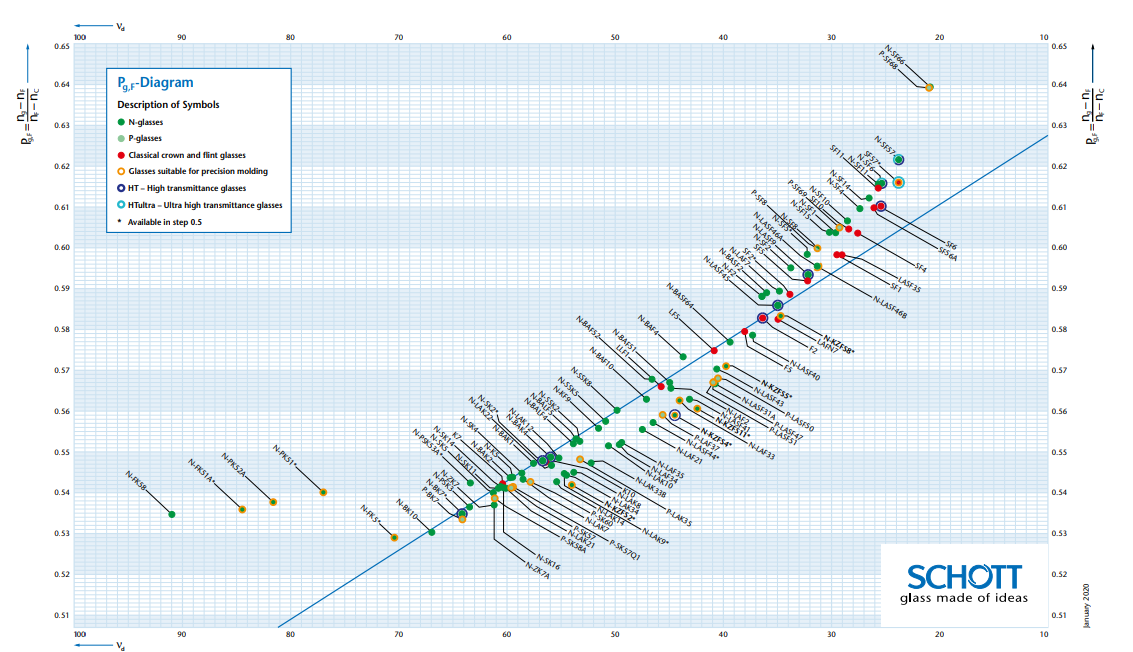 When designing a three-element apochromatic lens, we want one of the glasses to be off the straight line.  For doublet designs, we would like to have two glasses with equal P values, forming a horizontal line.  Possible choices of glasses for triplet-apochromatic lenses are: (PK51, KZSF4 and SF15),  or (PK51, LAF21, and SF15) .  Glass selections during the design phase play an important role in sufficiently reducing both chromatic aberrations and other aberrations on the selected wavelength range.  One of the clear benefits of using apochromatic lenses versus achromatic lenses is that we will have a better image quality.  This is of particular importance when working with digital image sensors, where individual pixels are sensitive to specific wavelengths (due to a mask over the sensing elements).