In a previous post, we explained the concept of a material refractive index in optics in the context of optical design.  Something that we didn’t review however is that many materials have two, three (and even more) different refractive indices depending on the direction and polarization of light.

This is a very interesting (and often undesirable) behavior of some materials that we called birefringence.  For example, let’s say that you have a piece of quartz and you look at a text behind it.  Under certain conditions, it will be possible to see the same text twice, kind of like a ghost image of the original text.

What happens is that light is being split into two parts, (one for each polarization) each carrying its own piece of the image.  We can think of it as a beam splitter, but instead of splitting the image at 90 degrees, it splits just a few degrees.  This is called double refraction.

This can be very undesirable but it is also possible to use it to our advantage. So let’s try to understand some of the sources of birefringence.

This is very common in some plastics that can be observed when they are bent or stretched.  Some plastics when illuminated by polarized light show some colors depending on the level of stress as shown in the figure. (See our post on how to build your own polariscope for an example)

Same concept as the Kerr effect, but the changes in refractive index are caused by the presence of magnetic fields. 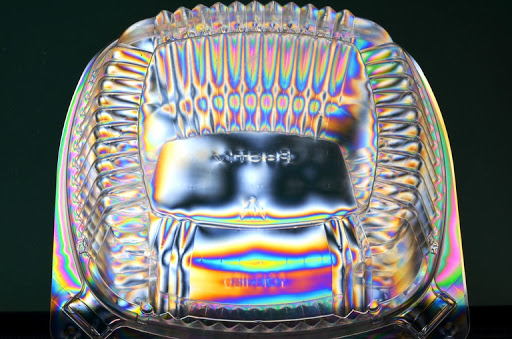 Birefringence has several applications.  It can be used to find defects in the manufacturing process, or identify weak spots in plastic structure manufactured via injection molding.

It is also used extensively in optical communications to change linearly polarized light into circularly polarized one and vice versa.  Optical circulators are fabricated using Faraday rotators as well as many non-linear optical devices are designed using the principles of birefringence.

There are textbooks written about the effects of birefringence and industries built around it (like liquid crystal displays). When birefringence appears in unexpected places, it can indicate manufacturing problems and material stress, but when controlled, it can be used productively.